A router is a networking device that forwards data packets between computer networks. The function of directing the traffic on the internet is done by routers. A router connects networks. Based on its current understanding of the state of the network it is connected to, a router acts as a dispatcher as it decides which way to send each information packet. A router is located at any gateway (where one network meets another), including each point-of-presence on the internet. A router is often included as part of a network switch. A data packet is typically forwarded from one router to another router through the networks that constitute the internetwork until it reaches its destination node.

Two or more data lines from various networks may be connected to a router. A router may create or maintain a table of the available routes and their conditions and use this information along with distance and cost algorithms to determine the best route for a given packet. When a data packet comes in on one of the lines, the router reads the address information in the packet to determine the ultimate destination. Then, using information in its routing table or routing protocol set, the packets are sent to the next destination accordingly. This creates an overlay internetwork.

Small office and home routers are the most widely used routers that simply pass IP packets between the home computers and the Internet. An example of a router would be the owner’s cable or DSL router, which connects to the Internet through an Internet Service Provider (ISP). More sophisticated routers, such as enterprise routers, connect large business or ISP networks up to the powerful core routers that forward data at high speed along the optical fiber lines of the internet backbone. Software based routers are also available although most of the routers are typically dedicated hardware devices.

In an enterprise, you can find routers of all sizes depending on their usage. ISPs, academic and research facilities are found to use most powerful routers for fast and heavy use. Large businesses may also need more powerful routers to cope with ever-increasing demands of intranet data traffic. A three-layer model is in common use, not all of which need be present in smaller networks.

Access
Access routers, including ‘small office/home office’ (SOHO) models, are located at customer sites such as branch offices that do not need hierarchical routing of their own. Typically, they are optimized for low cost. Some SOHO routers are capable of running alternative free Linux-based firmware like Tomato, OpenWrt or DD-Wrt.

Distribution
Distribution routers aggregate traffic from multiple access routers, either at the same site, or to collect the data streams from multiple sites to a major enterprise location. Distribution routers are often responsible for enforcing quality of service across a Wide Area Network (WAN), so they may have considerable memory installed, multiple WAN interface connections, and substantial on board data processing routines. They may also provide connectivity to groups of file servers or other external networks.

Security
External networks must be carefully considered as part of the overall security strategy. A router may include a firewall, VPN handling, and other security functions, or these may be handled by separate devices. Many engineers believe that the use of a router provides better protection against hacking than a software firewall because no computer internet protocol addresses are directly exposed to the internet. Many companies produced security-oriented routers, including CISCO PIX series, Cisco Meraki MX series, Juniper NetScreen, and WatchGuard. Routers also commonly perform network address translation, (which allows multiple devices on a network to share a single public IP address) and stateful packet inspection. Some experts argue that open source routers are more secure and reliable than closed source routers because open source routers allow mistakes to be quickly found & corrected.

Core
In enterprises, a core router may provide a “collapsed backbone” interconnecting the distribution tier routers from multiple buildings of a campus, or large enterprise locations. They tend to be optimized for high bandwidth, but lack some of the features of edge routers.

MikroTik is a Latvian company which was founded in 1996 to develop routers and wireless ISP systems. MikroTik now provides hardware and software for Internet connectivity in most of the countries around the world. Later MikroTik RouterBoard was born dedicated to manufacturing of hardwares.

The MikroTik RouterBoard RB951Ui-2HnD is a wireless SOHO AP with a new generation Atheros CPU and more processing power. It has five Ethernet ports, one USB 2.0 port and a high power 2.4GHz 1000mW 802.11b/g/n wireless AP with antennas built in.

MikroTik RouterBoard has a 600MHz CPU,128MB of RAM and PoE output function for port #5 – it can power other PoE capable devices with the same voltage as applied to the unit. Maximum load on the port is 500mA. 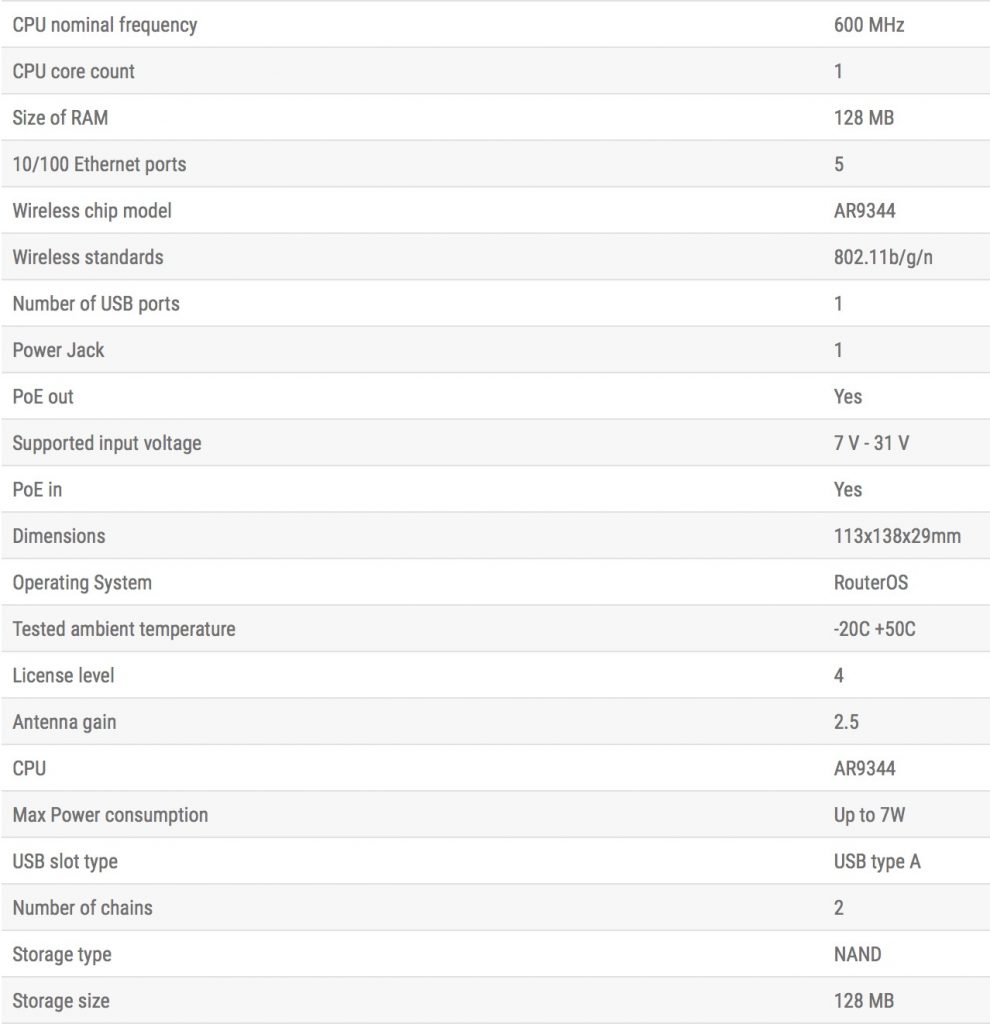